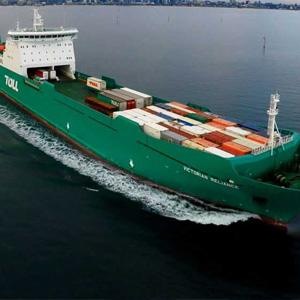 Large shipping vessels act as a sort of barometer for human progress. Before machines, long oars propelled ships. Then, during the industrial revolution, steam engines powered drive shafts in the bowels of ocean-going vessels. Truly, marine propulsion systems have developed at an exponential rate since the steam age. Now it’s diesel’s turn, but steam still has a big role to play.

Technically, this engine type gained prominence during the first half of the twentieth-century. Production has tailed off since the 1980s, but a reputation for reliability keeps steam turbine engines viable, even today. Anyway, a steam boiler lays at the heart of this classic engine design. That steam is produced by burning a fuel. Streaming through the propulsion system, the energetic steam expands, contacts the turbine blades, and generates rotational momentum, which then propels the large shipping vessel.

The longer title is earned. It’s bestowed on diesel engines because they’re economical and efficient marine propulsion systems. Essentially, this engine type has endured and adapted while others have fallen away. Propulsion energy is provided here by a combustible hydrocarbon. The fuel, marine-grade diesel, is channeled towards a pair of compression ignition engines. On arriving at the main and auxiliary drive equipment, the diesel internal combustion cycle is initiated, at which point the engine cylinders and pistons pass drive power to the crankshaft. Two-stroke variants tend to act as primary power plant engines while the auxiliary engine adopts a 4-stroke engine architecture.

Like the earlier steam turbine engine type, a rotary machine fitted with blades or vanes exists at the centre of this propulsion technology. The big difference, however, is the fluid power passing over the turbine’s moving parts. Instead of hot steam, it is compressed gas and a nominated fuel source that provides turbine impetus. A starter engine begins the sequence, then an air compression unit scoops outside air, pulls it into a combustion chamber, and completes the gas turbine sequence. Often classed as hybrid engines, they’re known to operate alongside diesel engines because the alternative propulsion source operates more efficiently at lower cruising speeds.

Mechanically, the engine types branch even further. There are reciprocating marine steam engines and cross compound double reduction steam turbines at sea. Designs like these exist to enhance certain drive characteristics, such as stopping power. Beyond the mechanical domain, numerous fuel types support diverse mechanical form factors. These include diesel and steam, gas and electric, and even liquefied natural gas (LNG). The goal, of course, is to propel large shipping vessels economically, speedily, and with a bias towards environmental protection.