Significant Purposes of Diesel Generators in the Maritime Industry 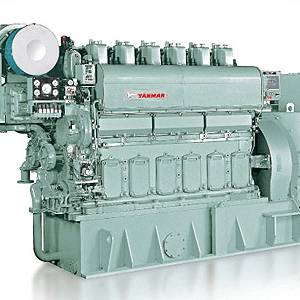 On land, electrical generators are marginalized. They’re important, of course, but mostly as “backup” devices because landlocked structures have access to grid-connected power. Marine vessels obviously don’t connect to this landlocked convenience, so diesel generators are used instead as primary power providers. But why is this system-essential machinery diesel powered? And how important is it, in the scheme of things?

Two or more diesel generators deliver electrical power to ships. The first is regarded as a primary power source while the second is classed as a backup device. Of course, this fundamental power generating blueprint is subject to expansion when the ship in question is built on a massive scale. Additionally, the main propulsion plant has been known to get in on the act as a subsidiary energy provider during long voyages, with a direct coupling mechanism then acting as a prime mover.

Cost-effective diesel engines propel colossal vessels across wide oceans. They’re efficient and especially suited for heavy applications. Meanwhile, the onboard diesel generators lever these same attributes when creating a dependable power source, one that’s fueled by the same economically viable hydrocarbon. The two machines are obviously related, but the end result of the engine’s actions is mechanical force, enough radial motion to thrust the vessel many kilometers over the sea. Conversely, generators transmit energy to a series of electrical windings. This stator is designed to produce large quantities of electrical power when its spinning rotor induces an electromagnetic field.

The Significance of Generators

Maritime electrical distribution technology is defined by a complex network of interconnecting systems. Several generators provide primary power to lighting circuits, steering systems and navigational controls. The failure of any one of these essential machines can be allowed when an auxiliary diesel generator is there to take up the slack. In effect, the self-contained floating city absolutely relies on this mechanical conversion equipment as an electrical power source, something that energizes every primary electrical and electronic system. That’s a heavy burden, for even the lowliest mechanical subsystem needs electricity, so every onboard diesel generator must promote reliable operation above all else.

The maritime industry vigorously supports a vast network of roving vessels and static platforms, but they’re a network in name only. Connected by communications channels and streams of logistics-oriented data, there is no real physical connection between these ships. There’s no ship-to-shore umbilical. Isolated by design, the marine sector relies on self-reliance, on the diesel mechanics and diesel generators that breathe energy into those autonomous vessels.