What are Marine Air Compressors? 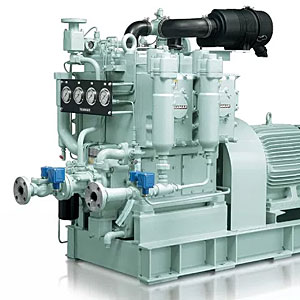 Descend into the bowels of a seagoing vessel. Down below the upper decks, marine air compressors are carrying out their duties. As the machine label implies, this equipment is designed to squeeze large volumes of air into a smaller space. Reduced in volume by a reciprocating mechanism, why does a marine craft require this essential gaseous resource? Before checking out those applications, what makes a marine air compressor stand out?

Based On a Robust Design Philosophy

Air compressors exist in many industrial and commercial applications. In a garage, the equipment powers pneumatic tools. Combustion prevention applications also employ pneumatic power, with the air taking on the role of a valve actuation source. On ships, marine compressors are built a little differently. They’re equipped with hardier filters, which is as it should be because of the corrosive salt air coursing through the gear’s suction line. Mounted on four-point rubber inserts, the equipment easily withstands the bucking waves. Meanwhile, a rigid skid supports a corrosion resistant diesel engine and the reciprocating mechanism while the vessel hull rides out the wet conditions.

Light up the machine room and look around. The marine air compressors are mounted on special frames. They contain every piece of equipment, from the engine to the air compressor assemblies and their coupled hoses. The modular design hooks into the ship’s systems seamlessly, it disconnects to facilitate overhaul work, and it also provides a single-source power output feature. This modular architecture is now favoured by ship designers, as it creates a useful system segregating build, one that benefits enclosed settings. In other words, every machine module can be partitioned, segregated, and replaced without causing a detrimental effect on any other ship system.

A primary compressor on board a large vessel acts as a safe power source, one that can kick a monolithic main engine into motion. Over at the opposite end of the machine room, a deck air compressor is topping up its receiver tank. Primed and ready to go, the discharged gas powers upper-level cleaning equipment and workroom tools. Passed through several power transforming stages, diesel fuel provides the original energy source, but it’s a safely governed air discharge line that delivers the end-line energy, courtesy of the vessels’ marine air compressors.

Diesel fuel conveys raw shipboard power, but that force isn’t about to pass through the boat in some awkwardly mounted gear train. No, that role is reserved for the onboard air compressors, the marine pneumatic engines that use a reciprocating design to generate a gaseous network of figurative tendons. Tasked with important duties, the discharged air is reduced in volume to the point that it can even start a large marine engine.