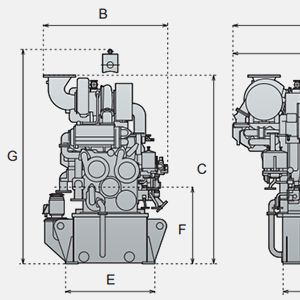 Welcome to yet another review on the Yanmar auxiliary diesel engines range. As covered in our other product commentaries, Yanmar marine engines occupy a prominent place in this notoriously arduous commercial and industrial sector. Right now, we’re going to delve deep into the functions that characterize this powerful engine family. Built primarily to generate electrical power, what functions define the capabilities of these workhorse diesel machines?

Yanmar auxiliary diesel engines produce either 50Hz or 60Hz of raw electrical power by employing an in-line 6-cylinder engine architecture. However, there are two exceptions to this rule. The 8EY26LW and 8N330LW power plants both opt for an 8-cylinder architecture, which isn’t a surprise when you consider the 2300kW and 330kW generator capacities specked by Yanmar. Engine speeds vary from one member of this exclusive electrical power generating family to the next, so expect at least 750 min-1 of velocity at the lower end of this engine speed table, with a 1000min-1 velocity topping the table’s upper limits. Depending on the electrical load of the vessel, those high-capacity models may need to be revisited, so visit the spec tables on the Yanmar website. Every conceivable engine parameter, including weight, is listed right there, with the 6 and 8-cylinder machines providing legacy power and a critically important reliability feature.

As mentioned earlier, these brawny engine sets are built to convert diesel energy into electrical power, which marks the equipment as possibly the most important operational gear on the entire ship. Only the two-stroke propulsion system is ranked higher. However, it’s easy to believe the auxiliary engine is at least as important as the propulsion unit, especially when the ship is cut off from shore. There’s just something about having the lights and heaters on when the night hours are present. Sure, the propulsion system gets you where you’re going, but that Yanmar auxiliary engine enables you to know where that destination is, no matter the time of day. Electrical navigational arrays are energized by this power, as are the helm stations that direct the ship.

When the functions of Yanmar auxiliary diesel engines are properly channelled, electrical stability is assured. That means an end to those worrying brown-outs that occur on a substandard engine configuration. Electronic systems function at their best when smoothly regulated currents are distributed throughout the vessel by a Yanmar marine diesel engine, so circuit breaker trips and troublesome overload conditions are no longer likely, not when the engine is properly maintained, at any rate.